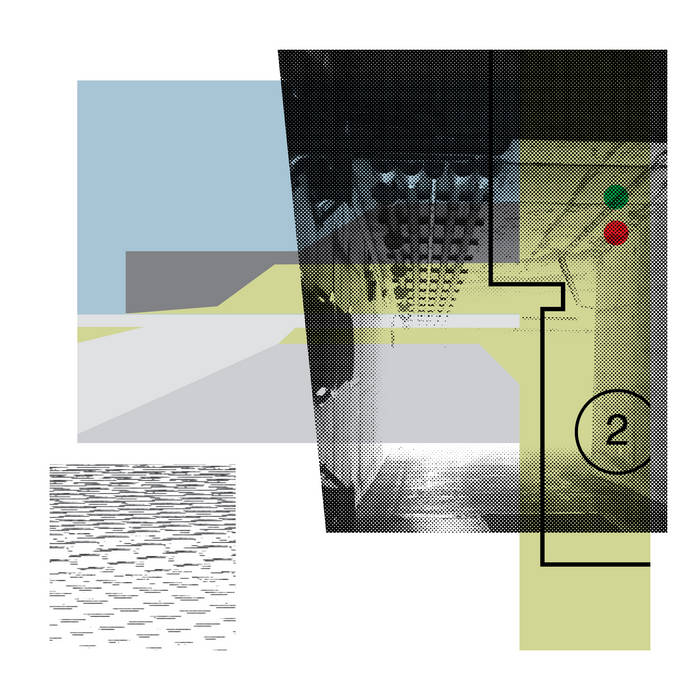 The sounds for this collection are all sourced from a former US military base near Cambridge, used for the decontamination of spy planes that had flown to the radiation-rich edges of space, en route to and from the skies above the USSR.

The artists take up the story:

“We spent an afternoon at the bunker collecting sounds and activating the space in various ways. We also played various sounds into the space, from synths or tone generators, at times recording the room sounds and at times improvising together, in a kind of joint performance with the space itself. Using contact mics and a sub speaker we turned some of the metal surfaces into low-frequency feedback resonators, using the material of the building to create sound.”

The fruits of their labours are a vibrant, absorbing admixture of thumping beats, brittle textures and uneasy tones that seem to have been mechanically reclaimed from the space in which they originated, chemically mutated into atavistic offspring.

“The weight of history and the pressure of recent political events felt ever-present both on-site and in the recording and mixing process. Whilst the cold war is ostensibly over, there are still regular news stories around the nuclear capability of various of the world's nations and stand-offs between their leaders. The tracks deal with the materiality of sound and the space in which it was produced and collected. Such an empty building does not lose its malignant potency through being decommissioned. The walls and control panels and few remaining objects give a half-told history, and this uncomfortable mystery is present in the finished mixes.”

As it continues to reveal its many layers over repeat listens, 'Blast Lock' is an evocative, endlessly detailed body of work that is as rewarding as it is energising. For music that ranges from the quietly understated to a full-on aural assault (with lashings of low end thump to worry any subwoofer), its genius lies most of all in the ability to captivate throughout.

In many ways it's the perfect Broken20 release, straddling the sonic boundaries of the label's output while remaining coherent, unified, complete.


Graham Dunning is an artist and musician based in London, creating audio, video, visual work and installations. His live performances include the infamous Mechanical Techno, currently nudging towards 5 million views on YouTube. He has released through Entr’acte, Seagrave, Tombed Visions and more.
Laica is the pseudonym of Dave Fleet, a musician based in Cambridgeshire “into the fringes and beyond of what can be considered sequenced electronica/techno”. He has released through Rano, Phatic Musk and Broken20, and is one half of the team behind the Arell imprint.