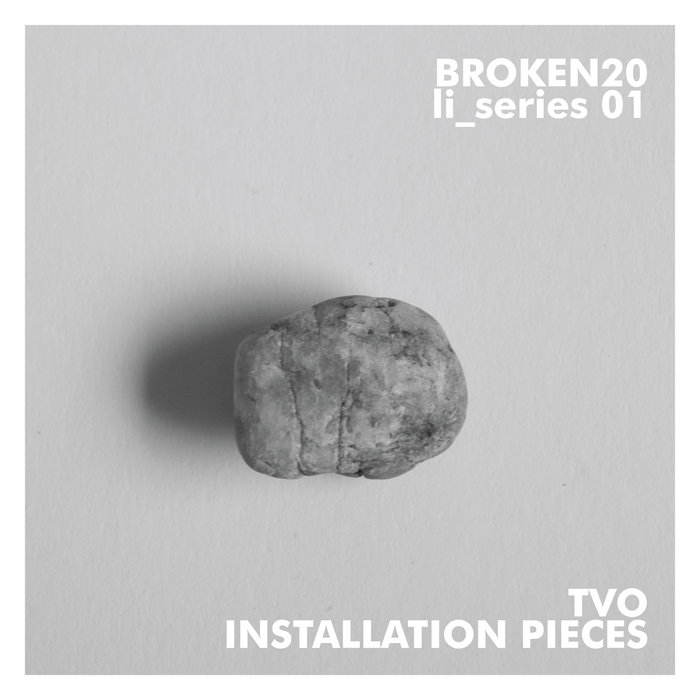 Broken20 commence the li_series, a set of collaborations between sound artists and the written word, released as a high-quality print with download code.

In neo-confuscianism, Li is the random but recognisable patterning found in many aspects of nature – the grain in wood or the fibre in muscle. While it is easy to recognise, it is impossible to define. The Li Series seeks to emulate this ‘thematic overlapping’ by combining EP-length sonic works with related or influenced text.

First in the series is TVO’s ‘Installation Pieces’. As the title suggests, the material covers four works from Ruaridh Law’s recent sound art creations, opening with ‘Four Windows On The Western Wall’, an experiment in light and motion sensing triggered with torches that generate harmonics and overtones (light) and textual source material (motion). The piece is deeply meditative, gently shifting in modal slow mo while lachrymose scrapes and scratches tap beneath the surface over its 14 minutes.

‘Liminal Threshold Moment’ follows. This shorter piece is an extract from TVO’s ‘Wind Die, You Die, We Die’ forthcoming on Broken20 later this year. It was commissioned for the ‘Burroughs at 100’ event in Manchester, and features an uneasy journey through soft spikes of digitality atop an underbelly of half-remembered melodies at 16rpm. In its full form it also heavily relies on turntable manipulation of Ed Asner reading William Burroughs’ work, soundtracking film shot in an abandoned asylum.

Keystone ‘Something That Reminds Me Of You’ is created from interviews used both as bedrock in an unrecognisable way, but also overtly. Darkness and light again provide the subject matter, as the voices describe their most fundamental associations with these simple but evocative terms.
Harking back to vintage Scanner as much as Coil, the piece was commissioned for ‘The Dark Outside’, a 24 hour festival of music never before heard, broadcast to (almost) nobody, and formed part of Broken20’s 10 hours of activity at the event.
The EP closes with ‘Four Windows Reprise’, as the release circles back to the first track, this time exposing the fundament before once more uncovering the organ-like tones and subtle pentatonic layers of its antecedent.

The included prints for this series have been created by Art Director David Fyans during time in exile in Germany, using objects collected during a shamanic dérive - an act of becoming quiet and allowing the landscape to guide movement and present hidden details and ideas. These objects have then been used as a basic ‘language’ and allowed to form their own inter-relationships and narratives, and have been arranged and photographed accordingly. Their natural affinity and the cohesive tone of the full set of imagery will, we trust, display Li across multiple layers of understanding over time.

In line with the overarching series ethos, the EP is a collaboration between music (Law) and text, with the latter provided by label cohort Dave Donnelly aka Production Unit, whose piece ‘Blue’ presents a flickering prediction of the near-future. Painted neither positively or negatively, its ambivalent tone and its grounding in notions of light/dark mean that it perfectly compliments TVO’s sonic accompaniment. Donnelly promises longer-form written content through Broken20 later this year.
Taken as a whole, ‘Installation Pieces’ forms a marriage of sound, word and image, united by the Li concept.