The Prospect Of Our Annihilation 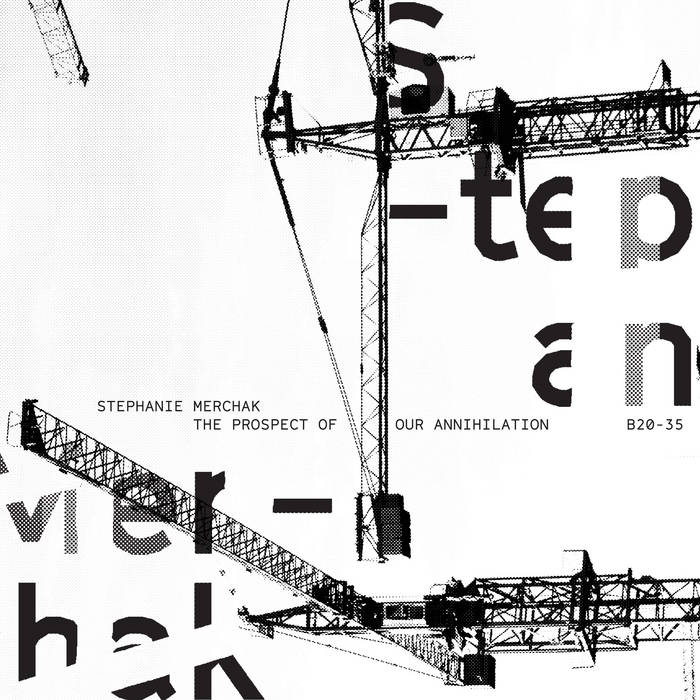 Broken20 return with the third in a run of 3” CD releases, Stephanie Merchak’s timely societal commentary cloaked in deep, foreboding drone, ‘The Prospect of our Annihilation’.

All four tracks were created using field recordings recorded by Merchak on construction sites in Lebanon. The recordings were processed beyond recognition to depict through sound an apocalyptic future where the earth has become inhospitable. Merchak writes: “This concept piece was inspired by some worldwide alarming news: the Svalbard Global Seed Vault partially flooding after permafrost melted, 1.12 trillion tons of iceberg breaking away from the Larsen C ice shelf and drifting to open waters, an Anthrax outbreak in western Siberia after an unusual heatwave melted permafrost releasing spores, a study by Chris Thomas and his colleagues at the University of Leeds warning that a quarter of land animals and plants may be doomed by 2050 due to global warming...”

She continues: “One of the culprits of climate change is the construction industry, which is one of the biggest sources of emissions and energy consumption. Humans keep building and replacing forests and green spaces with concrete thus endangering hundreds of species, increasing the amount of carbon dioxide in the atmosphere and contributing to soil erosion. In summary, humans are destroying their home.” As the contemporary activity is extrapolated to an apocalypse in Merchak’s vision, so the field recordings are morphed to their logical conclusion. Hence sonically, the sense of mechanical dread is manifested in lumbering semirhythmic motifs that stagger on- and offstage like drunken actors, playing on unsteady stage-boards of atonal drone. In contrast to the glacial crawl of most dark ambient productions, nothing in ‘The Prospect of our Annihilation’ remains static for long – except the tone and its implied warning. Physical copies will follow on from the format of previous Broken20 3” CDs by Laica and Ordeograph, whereby the inner sleeve is crafted to disrupt its physical limitations, bringing forth further visual interpretations on the source material and its underlying message.