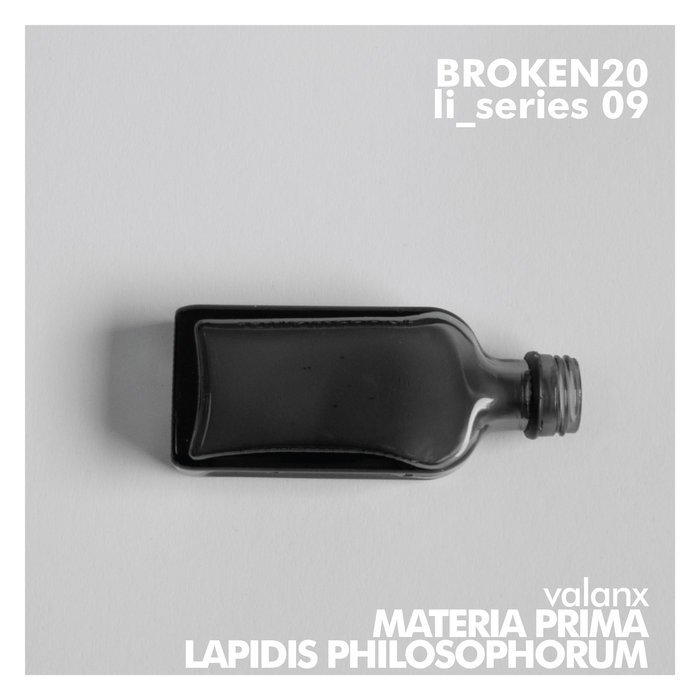 Finn of Tomland Yet another wonderful release from this very creative artist! Arne is a ray of darkness in the cold light and for that i'm very happy... Favorite track: Separation.

Broken20 continue the li_series, a set of collaborations between sound artists and the written word, released as a high-quality print with download code.


In neo-confuscianism, Li is the random but recognisable patterning found in many aspects of nature – the grain in wood or the fibre in muscle. While it is easy to recognise, it is impossible to define. The Li Series seeks to emulate this 'thematic overlapping' by combining EP-length sonic works with related or influenced text.


Ninth and penultimate in the series is Valanx's 'Materia Prima Lapidis Philosophorum' accompanied by a text from Morag Law.


Valanx is Arne Weinberg, and his main project since 2012. Initially known for his deep techno productions, his current moniker was borne of a decision to strip off all limitations and rules of dance music and to pursue a new artistic direction. The focus of Valanx lies on dark, apocalyptic, eerie and atmospheric soundscapes, often intertwinded with slow pulsating layers of rhythm.


His Broken20 debut, he says, is “inspired by the painting 'Materia Prima Lapidis Philosophorum' which symbolizes the alchemic transformation of the First Matter into the Philosopher's Stone in seven steps. Each of the tracks represents one of those transformative steps. The creation of music can be very similar to alchemy as both are based on experimentation, finding the right ingredients and transforming them into something new.”


Opener 'Calcination' centres around a morose single chord, drifting between foreground and back, and across the stereo field. It's ambient music of a sort, but too unsettling to be over-familiar, the sharp peaks that embellish its background cutting through any sense of comfort. 'Dissolution' follows, again using a single motif with a strong sensation of movement, the undertones now somewhat darker, more overt in their threat.


As Weinberg puts it, his Valanx project “focuses on my urge for liberation, and freedom of expression and experimentation.” 'Separation' certainly bears this out, seeming somehow more maximal despite the obvious restraint in its sound design. 'Conjunction' disperses with tonality almost entirely, while 'Fermentation' could be lifted from the soundtrack to Tarkovsky's “forbidden zone” - again, physicality and eerieness come to the fore.


'Distillation' turns the dark up once more, as layers of drone, broken percussion of sorts and slowly sweeping pads compete for attention, until closer 'Coagulation' lets loose a rattling, echoing single note that blends with string-like atmospherics and a haunting bass tone that strikes like a tolling bell. As 'Materia Prima Lapidis Philosophorum' fades, there is no resolution, merely an ending.


Morag Law is the translator of 'Dileab Cholbhasach' (A Colonsay Legacy), her mother's Gaelic memoir of rural life on a tiny Scottish island. As one would expect from that work, her concentrated tale of a hunt conducted across a deserted landscape is rooted in a deep sense of space, evoking a real connection between sound, place and the inner life that connects them: “The faint sounds of pursuit begin – at first it seems like the beating of my own heart or the pulsing of blood in my ears.”


As Valanx's music suggests tactile sensations and fear, so does the text: “All is dark and there is only the roughness of the bark beneath my fingers as I search for a place of sanctuary amongst the trees.” And as with the soundtrack, completion is not the same as closure. We're left with uncertainty, unsettled but hyper-aware of our surroundings, our fragility, our potential.