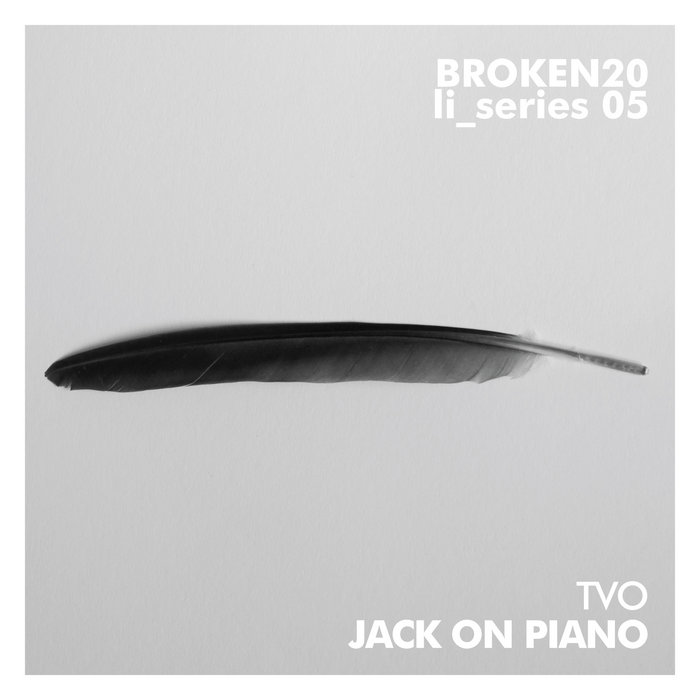 li is the random but recognisable patterning found in many aspects of nature – the grain in wood or the fibre in muscle. While it is easy to recognise, it is impossible to define. li_series elaborates on this ‘thematic overlapping’ by combining sonic works alongside new commissioned texts. This series of 10 collaborative assemblies are released as a printed A5 text, audio download and high quality 7×5” photo print.

Fifth in the series is label co-owner Ruaridh Law, aka TVO’s ‘Jack On Piano’, with writing by Eleanor Thomson in a piece called ‘Hidden’. TVO has long been fascinated with memory and transience. Indeed, the first release on Broken20 was ‘We Can Remember It For You Wholesale’, a meditation on memory and its fallibility. With ‘Jack On Piano’ Law delivers possibly his most overt construction on these themes, as it’s built purely on a found CDr of piano playing from Thomson’s elderly grandfather.

Thomson’s text is therefore more keenly linked to the accompanying audio than previous releases in the li_series, as it’s a lyrical depiction of her grandfather at the piano. She invites us to “...imagine the smell of wood, the sight of smoke and the taste of wine”. She evokes a subtle frustration at the intangible nature of time: “there are only faint traces and hints of him... I can still hear his breath.” This takes on extra significance once we learn that the recording is around ten years old, and our pianist is now older and infirm, meaning that the sound represents not just a pure document of the past, but also an archival freeze frame of a person now much altered by time’s passing – in many senses, a different person.

Sonically, the entire release is constructed from the found CD, complete with repetitions, pauses, speech and meanderings, making it, as Law puts it, “more of a field recording than a recording of a musical performance.” He also states that it’s the first time he’s tried to create purist ‘ambient’ music, in that “it’s designed absolutely for background”. Over six pieces, TVO creates a fragile sound world, as brittle and erratic as memory itself. While no other samples or synthesis are used, Law elicits his trademark sound through heavy use of granulators, comb filters and other over-processing techniques to build at times mammoth works that move from delicate minimalism to sheets of reverberated drone. The piano can be subsumed, and can then creep back inward unexpectedly to provide sudden ‘memories’ of the source material. As well as the clear antecedents in Law’s prior work, ‘Jack On Piano’ has echoes from the work of Philip Jeck and The Caretaker, artists who are similarly focussed on processing found material and rooting amongst old or forgotten motifs to unveil something new about ourselves.

In her text, Thomson seems fascinated by the totality of her grandfather’s presence in the audio, lamenting that “he is everything and he is hidden”, perhaps also ruminating on his diminishing vitality in contrast to the man he once was. But she ultimately finds solace of sorts in the creative energies that both he and she engage in, “the best and only version of every self.” And so, as in Law’s audio, there’s a sense that while we, like time, are ephemeral, we can and must listen, dance, write, sing, debate, create and laugh in the fleeting moment, because, well... we have to. The moment is all we’ll ever have.