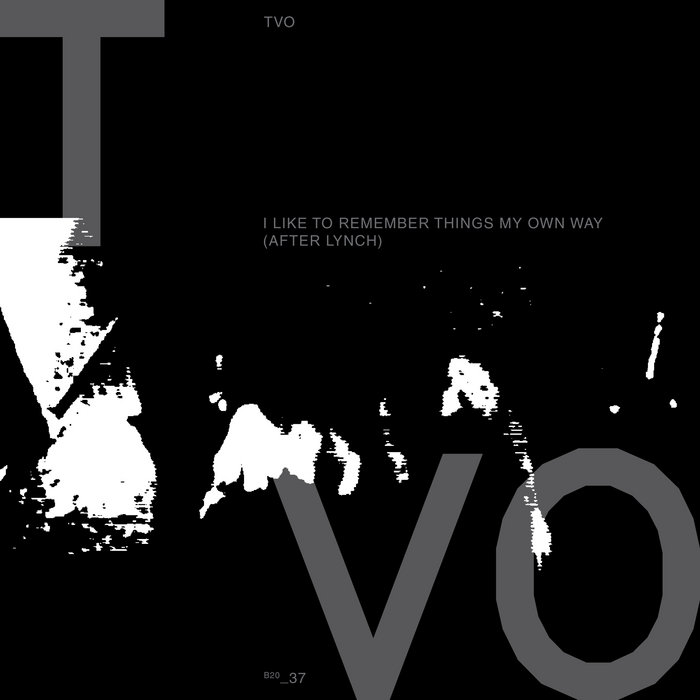 Broken20 unveil a new audiovisual EP from TVO, aka Glasgow's Ruaridh Law, one of the heads behind the label.

The EP's focal point is the opening title track, a long-form and intense beatless piece that circles, dizzyingly, around ominous, increasingly bitcrushed vocal samples taken from David Lynch's underrated “Lost Highway”. As the precise diction slowly disintegrates, walls of white noise, reverb and drone crescendo into a digitally overwhelmed and overwhelming morass.The track is served with an accompanying film taking the CCTV loops from the film as its starting point, and it’s an appropriate fit to a piece described by Law as “abstract horror with loss of brain function as the villain".

It's followed by a taut, swung 'Live Version', taking the spoken word as textural base rather than its centre. Intricate generative percussive hits and half-heard chord stabs sit atop weighty subs, bringing to mind a collapsing T++, a rave-ready Autechre or a hyperventilating Carl Craig.

The original A/V piece was written as an installation for the ‘Lynch’ event, a truly Lynchian celebration of “the first day in the 74th year of Our Lord David” organised by Glasgow's Logtoad / Guy Veale. It's therefore only fitting that Logtoad himself supplies the remix on offer here. Equal parts EBM, old skool breakbeat and classic Skam records, it's a wyrdly danceable mess.

A label owner, producer, sound artist and DJ, TVO has released on labels such as Broken20, VIS, Stuff, Moving Furniture and Highpoint Lowlife. His current and future activities include a new album with Stock, Hausen and Walkman's Andrew Sharpley, a collaboration with Dutch industrial legend Jos Smolders, and new work commissioned for the Liverpool Psychedelic Festival 2020.

Logtoad is a producer, performance artist and general nonconformist whose recent release was 'Rat Full Of Coins Vol 1' on the Optimo-aligned Against Fascism Trax.

The EP, mastered by Dave at Black & Red Mastering, will be available as a digital download and microsite including a new text piece from Ruaridh Law to accompany the film