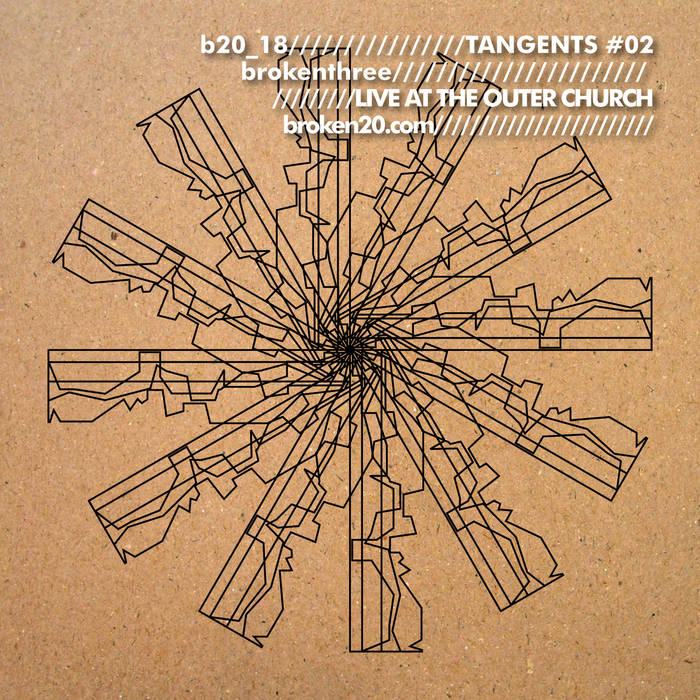 The Tangents Series is available on CD-r presented in a clamshell case with handmade inserts on lovely 210gsm recycled card by house designer David Fyans. It will also be available digitally.

Tangents #02 is from BrokenThree, recorded live and improvised in Edinburgh in 2013 as part of The Outer Church.

BrokenThree is a collaborative effort from Erstlaub, Production Unit and TVO, who are collectively the heads behind Broken20. The group was borne of necessity when The Wire’s Joseph Stannard requested a contribution from all three artists for his ‘The Outer Church’ compilation on Front & Follow records.

When Joe brought his uncanny audiovisual activities to Glasgow and Scotland in 2013, the three embarked on an improvised live performance. A visual score was created to illustrate the relative activity of each player at any point. Rules were set: two agreed tempos, two keys, but with an agreement to work separately on the constituent parts so that each participant had no idea what the other two would play. A kind of reanimated exquisite corpse.

There was a division of labour, too: Erstlaub would provide ground, texture and gravity, basting the overall sound in the kind of meditative drone that characterises his long-form releases such as ‘Marconi’s Shipwreck’ [Broken20]; TVO would supply beats, chaos and semi-rhythmic noise in line with his hardware-focussed recent works like ‘Red Night’ for B20 tape offshoot, Broken60; Production Unit’s remit was for notes both melodic and dissonant, ranging from subs, lush strings and plinking marimbas to the peremptory squawk of seasick pitching hospital machines first heard on ‘ICU Tracks’ [Broken20].

It could have gone horribly wrong. An orchestra of soloists is a dirge. But what transpired was a three-headed beauty, with a likeness to all its parents. Referencing classic ambient chill out as often as rough-edged brutalism, and possessing a clear narrative flow thanks to the score that’s referenced in the accompanying artwork, it’s a triumph for democracy, restraint, kismet and shared artistic vision.

Erstlaub is the alter ego of Dave Fyans, the label’s Art Director and an artist who deals in sound, performance, installation, text, and still and moving images. The influences in his deep drone transmissions lean toward subconscious interventions, mysticism, psychology, extra-dimensional and liminal spaces. Aside from Broken20, he has released on Highpoint Lowlife and Moving Furniture records and recently collaborated with TVO at The Dark Outside festival on an 8 hour continuous improvised performance.

Production Unit has released an album and an EP for Broken20, as well as recording as Dour Tonic Input for Broken60. He recently collaborated on a live performance project with TVO as part of a fundraising event for Palestine; the two are currently in production of a psychogeographical film based in and on Glasgow, with film-maker and photographer Brian McGovern.

TVO has been lauded by The Wire as a practitioner of “meticulously textured, atypical techno” and by The Quietus as “one of the UK’s most unfairly overlooked electronic artists”. His previous releases have been for the likes of Stuff, Highpoint Lowlife, Broken20 and tape offshoot Broken60. Recent work includes the performance ‘Wind Die, We Die, You Die’ as part of the Burroughs at 100 event and his prior release ‘LiveGlasgow040414’ with Paul Purgas, the inaugural Tangents release on Broken20.