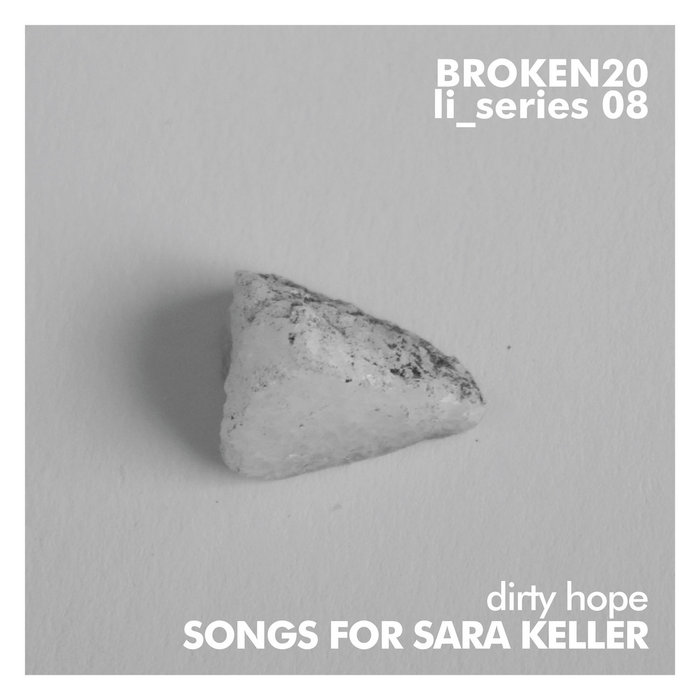 Broken20 continue the li_series, a set of collaborations between sound artists and the written word, released as a high-quality print with download code.

In neo-confuscianism, Li is the random but recognisable patterning found in many aspects of nature – the grain in wood or the fibre in muscle. While it is easy to recognise, it is impossible to define. The Li Series seeks to emulate this 'thematic overlapping' by combining EP-length sonic works with related or influenced text.

Eighth in the series is Dirty Hope's 'Songs For Sara Keller' accompanied by a text from Alasdair Satchel.

Dirty Hope, aka Production Unit, aka label communications director Dave Donnelly, brought his electrified post-rock to li_02 with 'Storm Katie', a long-form meditation on slowness and fragility. 'Songs For Sara Keller' is comprised of 4 tracks, and largely veers away from 'Storm's sense of foreboding.

As Donnelly tells it, “Dirty Hope is becoming a bit of a thought experiment; basically me imagining a group I always wanted to be in, jamming in a Chicago loft with slightly unpredictable band-mates. For this release, I had a clear image in my head of the fictitious space and equipment that would create the sound, and that really affected what came out it. So while 'Storm Katie' was me eking out an understanding of the band, this release feels a bit more comfortable and is probably less gloomy as a result. It's me and them cutting loose a bit and having some fun.”

Opening with the music box and chaotic noise of 'Toybox', we're introduced to the twin touchstones of delicacy and dissonance that run through 'Songs...' Meanwhile the closeness of a manual crank handle and the shifting of players in their seats seem to almost intrude on the melody as it drifts away into shimmering reverb.

It's followed by 'Jam In An Imaginary Loft', where the sounds of Reichian marimbas, gently polyrythmic vibraphones and drum kit give way to a woozy Moog bassline and nimble footed organ stabs over an almost 4/4. Spread over 14 minutes, its the EP's centrepiece and a fine distillation of this non-band at the peak of their powers, the mid-section eventually ceding control to the endlessly shifting tones of the track's beginnings.

'Shopping Centre Roof Screeches' acts as a palate cleanser, its brittle marimbas acting as counterpoint to the howling of a battery-operated noise box. The ghosts of a sort of house music return on the final track, 'Other Things', as it lurches to a lumpen 110 shuffle like a slugging Dilla beat, via a cheapo Bontempi beat and lush synth strings, before those same strings usher the mallet instruments out, and up to the stars.

Alasdair Satchel is a film and theatre maker, based on the Isle of Mull, working wherever the wind blows, He's an old friend to the label, having collaborated with TVO on their guitar drone project Accrual via releases on Static Caravan and Moving Furniture.

His piece, 'A Single Point', portrays a child in a cot, overcome by a sensation of falling through both space and time, “Spiral arms flail outwards from a single point in time both ancient and accelerated... Distances stretch endlessly from the single point. Time as distance. Time threading out in to infinite strands.”

As 'Other Things' fades out, the sense of dissipation is palpable, but inevitably the outside world intrudes, or as Satchel puts it, “The pressure gives. The flame erupts and the child opens its eyes.”