li_series 03: The Ruin Of Tallis 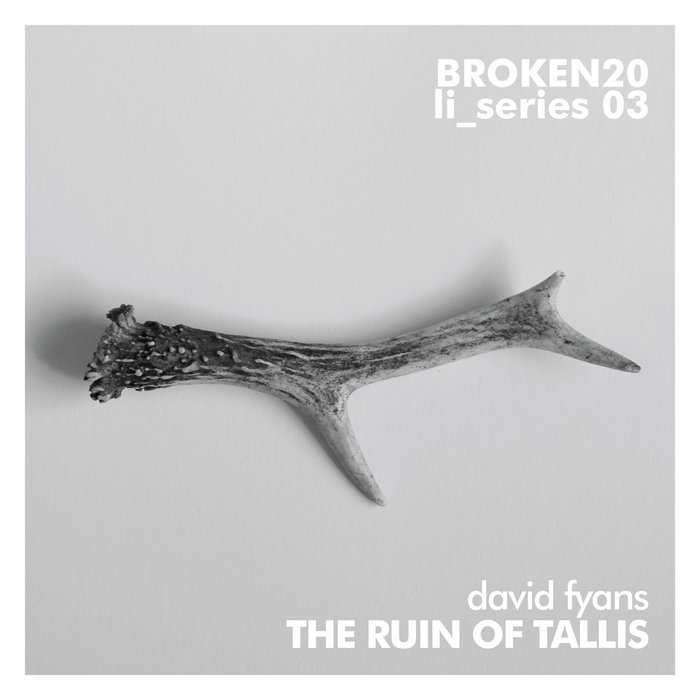 li is the random but recognisable patterning found in many aspects of nature – the grain in wood or the fibre in muscle. While it is easy to recognise, it is impossible to define. li_series elaborates on this ‘thematic overlapping’ by combining sonic works alongside new commissioned texts.

This series of 10 collaborative assemblies are released as a printed A5 text, audio download and high quality 7×5” photo print.

Third in the series is ‘The Ruin of Tallis’ from Broken20 art director David Fyans, with his Erstlaub alias currently MIA and, geographically dislocated from the landscapes that usually inspire him, it finds him in a newly introspective state, mirrored in his recent visual and audio works. The release is a collaboration with writer Gareth E Rees whose text is entitled ‘A Vision Of Duncan Sharp'

Fyans again provides the imagery for the release. He continues his recontextualisation of found objects used on the first couple of releases in the li_series - TVO’s ‘Installation Pieces’ and Dirty Hope’s ‘Storm Katie’ - as his unified “visual language” continues to accrue.
Sonically, ‘The Ruin of Tallis’ takes influence from a host of drone forebears. It builds from a gentle fade into subtly pentatonic shifting sands, replete with ebbing harmonics and flowing counterpoint, calling to mind LaMonte Young and Alvin Lucier. The pace of change is undoubtedly glacial, but Fyans states that “I wanted to focus on that idea that if you can get over the relative fixed nature of the drone, the amplitude and harmonic structures start to define it.”

Rees runs www.unofficialbritain.com and is the author of ‘Marshland: Dreams & Nightmares on the Edge of London’ (Influx Press), which he describes as “a time-travel journey through the Lea Marshes, weaving together supernatural stories, local legends, weird histories and tales of my own encounters and mishaps.”. In ‘A Vision Of Duncan Sharp’, he describes an uncanny experience revolving around a park bench, a maniacally laughing ghost and the underlying strangeness of our everyday existences. Moving outwards from the marshes, Gareth E Rees has spent the last 3 years living and writing around Hastings and the South East Coast.

The audio progresses over a narrative based on a series of tidal washes, as volumes build and break in slo-mo sequence, but its development is aided by subtle arcs that move in different cycles, generating ever-new combinations of tone and colour.
In the piece Fyans attempted “a sort of take on my idea of Thomas Tallis-esque choral music, by means of investigating the notion that something can do very little on the surface, meaning that you get lost in the details and textures that remain.” The piece can be approached as one would a sculptural work, imploring the listener to map the surfaces, the shadows and light in an attempt to grasp the whole from a passing temporal viewpoint.
For his accompaniment, Rees sought to investigate “the way objects take on spiritual significance”, echoing the art for the li_series. By its close, there’s a clear sense of release, of sorts, and of having snatched a glimpse of the crazed inner logic of nature and time. This matches the feeling of spiritual deep cleanse that tends to accompany Fyans’ best work, where its meditative aspects lead to redemption and closure.

Like previous li_series releases, the thematic overlap between text and sound is only partial; a feeling in the gut more than a tick-box exercise in matched content. The full series, released in monthly instalments, will run to 10 editions throughout 2016.