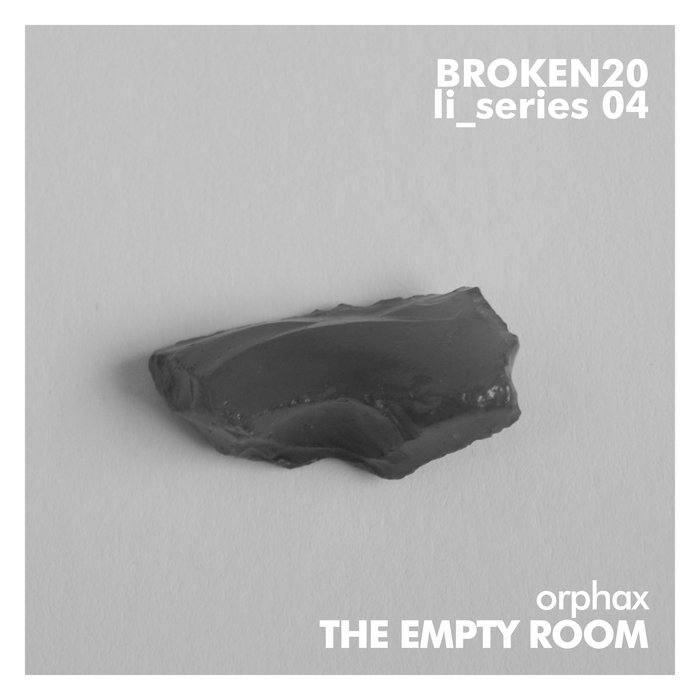 li is the random but recognisable patterning found in many aspects of nature – the grain in wood or the fibre in muscle. While it is easy to recognise, it is impossible to define. li_series elaborates on this ‘thematic overlapping’ by combining sonic works alongside new commissioned texts. This series of 10 collaborative assemblies are released as a printed A5 text, audio download and high quality 7×5” photo print.

Fourth in the series is ‘The Empty Room’ by Moving Furniture label owner and Broken20 friend Sietse van Erve aka Orphax. The text is a collaboration with Murdo Eason from the Fife Psychogeographical Collective, whose piece is entitled ‘Petrichor’. Broken20 art director David Fyans continues his visual narrative that provides a common context to the series, his found pieces once again reconfigured into the print that accompanies the release. In its sonic form, this instalment features two knee-deep sine wave experiments.

As van Erve tells it, “The Empty Room is an album with two long tracks based on strict boundaries by using the same set of pre-recorded sine tones. In the music my interest in slow (or almost absent) changes becomes more and more clear. Due to the slowness it becomes a thing where you for a moment lose the concept of time and space.” While the first part is undoubtedly hypnotic, its meditative overlapping tonalities weaving in and out of dissonance and counterpoint, the second is arresting and pensive, using more pronounced oscillation to almost hover in the air.

Eason’s text seems to modify the sound itself, shifting even the first piece from a plaintive reverie to channelling of dark spirits. One can imagine a languid Tarkovsky shot of the titular room, a dolly gradually encircling the empty space, the scent of musk and dank practically creeping out from the screen. The author takes inspiration from the environmental clues afforded by Fyans in his artwork. A chip of obsidian becomes “Smooth, solid flux”, a literal touchstone for the ideas of solipsism and dearly held memory that populate ‘Petrichor’.

Amsterdam based musician and trained drummer van Erve always works with an organic touch, often incorporating sounds that would be regarded by others as errors or mistakes, because as he puts it “life isn’t without errors either”. In his most recent work time and spatiality have become more important factors. Most of his work is improvised, using a laptop and random objects ranging from keyboards, bowed plastic cups, to vocals. The result is an organic lo-fi form of drone and minimal music.
Murdo Eason, the avatar of Fife Psychogeographical Collective (https://fifepsychogeography. com) is a stalker of space and time, pulling missives from the stones and hidden paths of his geographical neighbourhood. His recent tome ‘From Hill To Sea’ (Bread and Circuses Publishing) has been met with wide acclaim and spans four years worth of poetic excavations and obscured histories.

In this iteration of the li_series Broken20 once again find a sense of partial overlap between sound and word rather than outright congruence. Orphax’s delicately crafted drones are given light and new life by Eason’s interpretations, thereby allowing both a little space to coexist and ultimately flourish independently. The full series, released in monthly instalments, will run to 10 editions throughout 2016.