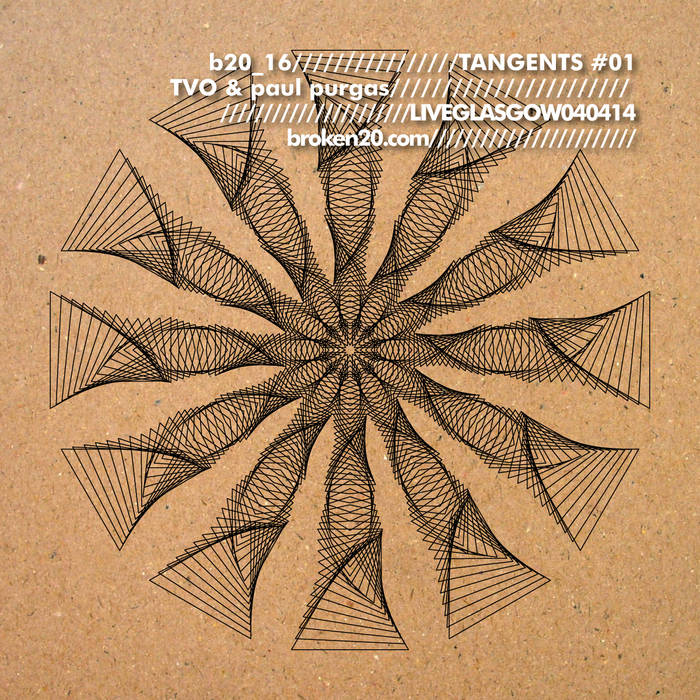 The Tangents Series will be available on CD-r presented in a clamshell case with handmade inserts on lovely 210gsm recycled card by house designer David Fyans. It will also be available digitally.

Tangents #01 is from TVO and Paul Purgas, recorded live improvisation at Glasgow School of Art on 04/04/14 as part of a Guild Of CalamitousIntent event.
As fellow travellers through live appearances and via Purgas’ remix for bk20_05 (by Production Unit), TVO’s Ruaridh Law and Emptyset’s Paul Purgas embarked on the performance with little in the way of shared preparation. Each party had constituent ingredients to bring to the table but interaction and counterpoint were left wholly to chance. What resulted was at certain moments a two-headed beast, at others the expression of determined purpose from a unified perspective where, as often as not, the sounds emanated from the opposite number their past form would indicate – TVO at times providing the rarified percussive bass-weight while Purgas brought degraded techno elements to proceedings.
But it would be remiss to characterise the session as pure muscle. One notable exception occurs halfway through, where glassy pulses and lilting harmonics rise out of any semblance of beats and hover ethereally over proceedings, before melting into fizzing, degraded hits and abnormal service is resumed. Again, at the piece’s coda, blissed-out arpeggios haunt a machine-hum bedrock before collapsing into lost time.

TVO is one of the label heads of Broken20. His interests are in sound art, the occult, sub bass, and all the points at which they intersect. Lauded by The Wire as a practitioner of “meticulously textured, atypical techno” and by The Quietus as “one of the UK’s most unfairly overlooked electronic artists”, his previous releases have been for the likes of Stuff, Highpoint Lowlife, Broken20 and tape offshoot Broken60. Recent work includes a collaborative installation at The Dark Outside (“24 Hours of Music nobody has heard in a place where nobody might hear it”), the performance ‘Wind Die, We Die, You Die’ as part of the Burroughs at 100 event and ‘The Longest Direction Between Two Points’, a free EP on Broken20.
Paul Purgas trained as an architect and graduated from the Royal College of Art. In 2005 he co-founded the collaborative sound and installation project Emptyset with James Ginzburg examining full frequency audio and the legacy of Structural/Materialist production. Emptyset now forms part of the German based raster-noton collective. In addition he has presented sound and performance projects with Tate Britain, Whitechapel gallery, Frieze and the Whitstable Biennale. His written work has been presented at Focal Point Gallery, Banner Repeater and Transmediale, and he is a 2015 artist in residence at Wysing Arts Centre