There Are No Shortcuts In A Grid System 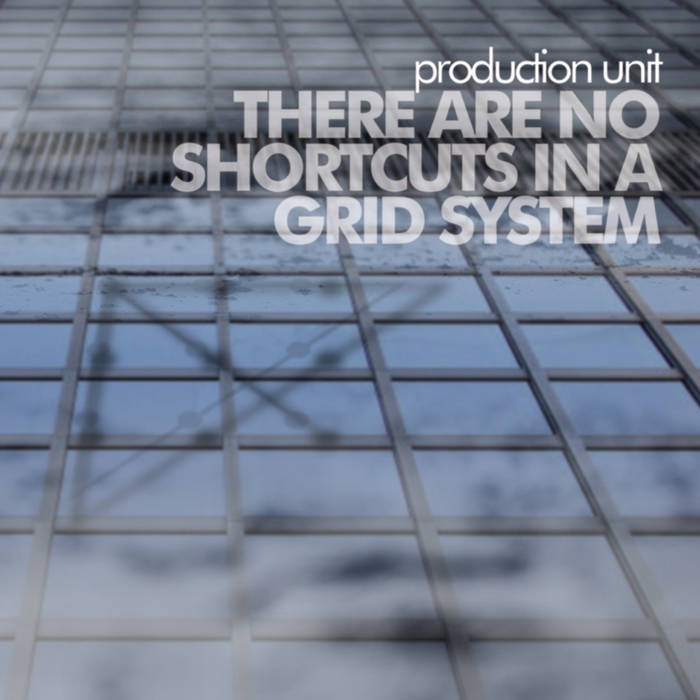 No Fear Of Pop

Production Unit (aka Dave Donnelly)'s album was supposed to be on tape. It was composed as two sides of
blended music comprised of individual tracks with strong common themes, but the crisp highs and deep lows
caused label boss TVO to put his foot down, demanding a digital-only format that allowed the precision to
sing.

This mirrors the way the album itself evolved organically: “Each track is a remix of its preceding track,”
writes the artist. “I was trying to figure out a way of building a narrative, and of glueing the whole thing
together sonically, and this seemed liked the perfect way to do both. As a result I think it flows, and that was
important: not just to curate a collection of tracks but to chart the progression of an idea.”

That idea is explained by the track titles of each side: 'There Are No Shortcuts In A Grid System', evoking
notions of learning one's craft and understanding a pattern; 'There Is No Grid', suggesting that in order to
step outside the system one must first know it, much as an abstract painter studies form before depicting
expressionist ideals. Sonically there's a touch more bombast in the first half, a sense of surety that the latter
portion lacks as it melts into unquantised, detuned sonics.

The original self-imposed remit was a melding of the squashed and degraded hip hop of Req with the clean
jitters of Mark Fell, but “I was quickly also haunted by spectres of Workshop records, Boards of Canada and
Coil. I'm happy nowadays for a remit to slip like that; what's important is that the sound of me comes out,
regardless of whether it tallies with an artificial idea I might have had at some point, let alone an idea of my
music that someone else has. There's no point in tying yourself in knots over constructs.”

Fans of the austere bleepy techno of Production Unit's prior release, the well-received 'ICU Tracks' on
Broken20, will do well to take heed of this new-found bravado, but Donnelly is unapologetic: “I don't own
anybody's ears and nobody owns my brain.” Played and charted by the likes of The Black Dog, Shifted, Paul
Woolford, The Wire Magazine and Cassegrain, it found Donnelly a new audience that may be surprised by
the bedraggled click-hop of his latest efforts.

After twin opening low-slung salvos, 'Third Step' is an undoubted early highlight. Combining slow thumping
4/4s at sub-105bpm with stuttered samples and the first hint of the glacial synths that adorn the rest of the
work, it's a statement of intent. Later, the sparse and lumpen hip hop swagger of 'The Next Ish' collapses
into woozy sunburst chords, out of breath vocal snatches and picked melodies from a lost surf betamax. The
deeply redemptive, pastoral organs of 'Ishoos' draw matters to a gentle close.

In the second half, the first suggestions of reality-collapsing occultism feed into the bubbling echo chamber
industrial of 'No Grid For Sure', before more hazy chords drawl over a meandering square wave in slow
burner 'Nothing Is Sure'. Penultimate track 'Nothing Is True' depicts a headblown ritualism, drawing together
multiple strands from the preceding ten tracks into an incantation for a cleansed, burnished tomorrow,
before the final tracks links back to the four counted steps from the album's opening and reduces them to a
repeated “one, one, one”.

'There Are No Shortcuts In A Grid System' is a genuine attempt to provoke dialogue with the listener and
portray the growth of an idea and an artist in its 60-odd minutes, and as such is an unqualified success.
Mature, playful and studied, it's the culmination of Production Unit's career to this point.

'There Are No Shortcuts In A Grid System' will be released digitally and in a highly limited collector's edition
featuring custom USB drive, art prints, trinkets and download codes for extensive exclusive content.